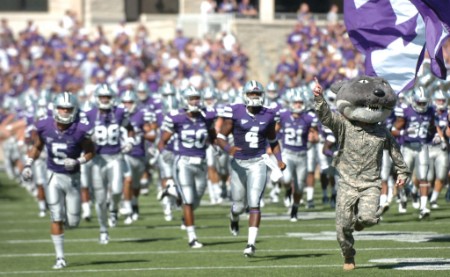 It’s hard not to look into last year’s matchup when previewing a game, especially when that result is baked into the spread. Mississippi State was a -7.5 point favorite with an over/under of 52.5 the Wednesday before this game. Remove last year’s result and the spread would probably be a couple points smaller.

Miss. State handled K State last year, at least on the ground. The Bulldogs ran for 384 yards on 39 carries while the Wildcats had 113 yards on 35 carries. Neither team could pass the ball and MSU went on to a 31-10 win.

The difference this year is that Mississippi State’s defense doesn’t look as good, giving up a combined 43 points to Louisiana and Southern Miss. Without a dominant defense, the opening will be there for the underdog to cover.

So far, so good for new Kansas State head coach Chris Klieman. Sure, this is the first real challenge of the season, but everything has gone to plan early. Skylar Thompson is a mobile quarterback, but hasn’t been needed to move around in the pocket yet.

Running back James Gilbert has been running freely on 8.4 yards per carry with his backups at similar numbers. Top receiver Malik Knowles also looks set for a big year, at least for a freshman.

Kansas State Should be Able to Run

It remains to be seen what they can do against a real defense, which will come in this game. Of course, Mississippi State’s run defense doesn’t look as good as last year, giving up more than four yards per carry in its first two games. That’s exactly where K State will attack and they should have more success than a year ago.

It’s the same question on the other side of the ball because KSU has yet to be challenged. Its run defense was non-existent at times last year, but has been better this year, though it still gave up 6.5 ypc to Nicholls State.

That could be an issue because Miss. State also wants to run the ball as much as possible behind running back Kylin Hill, who already has 320 yards and three touchdowns. The difference this year is that quarterback Tommy Stevens isn’t as mobile as Nick Fitzgerald was so the running game is also limited to Hill.

The other part is that Stevens is dealing with a shoulder injury and if he can’t go, freshman Garrett Shrader would get the call. If the freshman starts, it’d be hard to take the Bulldogs at more than a touchdown, though that probably won’t change much because they’ll still run all game.

If KSU’s run defense steps up, this game should be competitive, at least more than a year ago. However, that question still can’t be answered so there should be fairly even money on each team. The under is 7-1 in the Wildcats last eight in September, while the Bulldogs are 13-3 ATS in their last 16 at home.