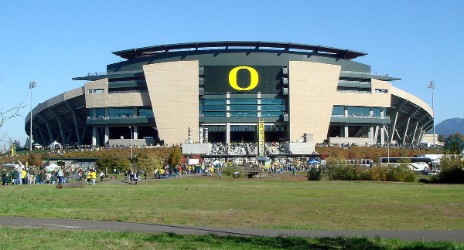 Oregon hosts Nevada as a 24 point favorite in week 2 college football betting action with a posted total of 61 at 5 dimes sportsbook. The game opened as low as -20.5 (betonline) but the Ducks are drawing the majority of the betting interest.

A lot of eyes will be on Oregon to see how it bounces back from a last-second loss to Auburn. The Ducks seemingly had a win locked up until they didn’t. It was kind of the opposite for Nevada, who came back from a 31-14 deficit in the third quarter to win 34-31 against Purdue.

Considering Oregon had aspirations of making the College Football Playoff, it’s a wonder how it will play in this game. The spread seems kind of high, but the path is there for Justin Herbert to go off against this defense, which allowed 423 passing yards to Purdue last game.

Oregon Offense to Has it Easier this Week

Oregon’s offensive numbers didn’t stand out in the opener, but that’s because Auburn has one of the best defensive lines in the country. There’s a decent chance Herbert posts huge numbers in this matchup with top wideouts Johnny Johnson and Jaylon Redd also expected to have huge outings.

The same goes for CJ Verdell and Travis Dye in the backfield because even though they struggled to get going against Auburn, Verdell still showed flashes, highlighted by a 37-yard run.

As long as the Ducks forget about that first loss, it wouldn’t be surprising if they dropped 50 points in this game since Nevada’s defense doesn’t look much improved from a year ago even if it put the clamps on Purdue in the second half.

For the underdog to have a shot, its offense needs a better start. The main reason the Wolf Pack had a chance against Purdue was because the defense got a couple turnovers and that led to some short fields.

Otherwise, they scored seven points in the first half and the overall numbers weren’t anything special as quarterback Carson Strong averaged 5.8 yards per attempt. He threw three touchdowns, but the redshirt freshman has something else waiting for him in his first true road test as a starter.

But before Strong is forced to air it out, Nevada will probably try and establish Toa Taua on the ground, something that didn’t fully work against Purdue. While Oregon’s run defense isn’t bad, it got gashed a couple times by Auburn and allowed 206 yards on 4.8 yards per carry. That could help Nevada move the chains and stay somewhat competitive.

Nevada won its bowl game last year, but it often struggled against better competition, especially on the road. That’s highlighted by an early 41-10 loss at Vandy and 63-44 loss at Toledo.

Combine those teams and they are somewhat similar to what Oregon presents at its best. The Ducks have one of the better offenses and quarterbacks in the country while also proving formidable on the defensive side. If the Ducks come to play, covering won’t be difficult, but if they can’t get over their opening loss, anything is on the table.

The Wolf Pack are 1-7 ATS in their last eight September games and the under has hit in the last four non-conference games for the Ducks.