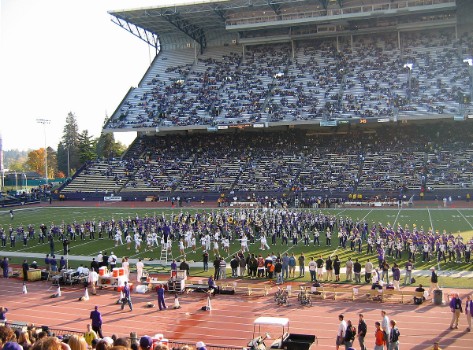 Things are about to get ugly and that’s seen in the spread for this game. As of Wednesday, Washington was a -14 point home favorite with an over/under of 43.5 against California.

Last year’s result likely has something to do with the total not even scratching 45 points. When these teams met last October, it didn’t go to plan for the Huskies, who lost 12-10 as an 11.5-point favorite.

For Cal It’s All About Defense

It wouldn’t be surprising if this game went a similar way because that’s how Cal wants to play. It beat UC Davis in the opener, but it wasn’t pretty, going down 10-0 early before the defense took a hold of things.

The Golden Bears will likely stick to their defense-first mentality and hope to keep this game low scoring, which may be the only way they can cover. Quarterback Chase Garbers has another year under his belt, but he’s still not a guy who’s going to break open a game with his arm.

This offense will lean on Christopher Brown and the ground game as much as possible. In fact, they averaged just 2.5 yards per carry (sacks included) in last year’s win, yet they still kept handing it off as Garbers attempted 23 passes.

The hope is that they can get enough first downs to keep the clock churning. Otherwise, it’s hard to see Washington scoring only 10 points again.

The Huskies lost their long-time starters at quarterback and running back, but there’s a chance this offense is actually better. Jacob Eason is a high-level recruit who started the majority of 2016 at Georgia, albeit with iffy results.

But that was three years ago when he was a freshman. Now in his home state and in a weaker conference, Eason has a chance to take UW to the next level and while the opener against EWU was a freebie, it was still a nice performance.

Throw in what looks to be a solid duo at running back between Salvon Ahmed and Richard Newton, and this offense is in good shape. That doesn’t include what could be a better receiving corps with a hopefully improved Andre Baccellia, Hunter Bryant and Aaron Fuller.

The question is what Cal’s defense can do against Eason and company. Cal surprisingly gave up 4.9 yards per carry to the UC Davis running back, which could lead to trouble in Pac-12 play.

In last year’s meeting, UW managed just 2.8 yards per carry and 91 rushing yards. Playing at home, the Huskies get a leg up, but there may be some trepidation in taking them given how last year went.

The under has hit in Cal’s last eight road games and is 10-1 in Washington’s last 11 against a team with a winning record. It’s also 9-1 in the last 10 meetings between these schools, while the road team is 5-2 ATS in the last seven.

Read our season previews for Washington and Cal