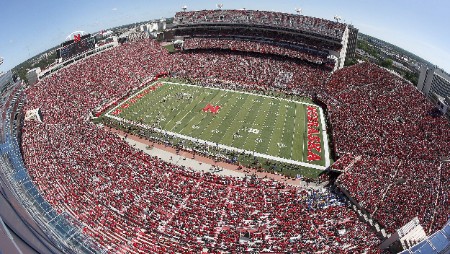 Before the season, this matchup had some of the better odds to be the Big Ten title game. While that could still happen, it’s going to take major improvement from Nebraska, who has scraped together a 3-1 record. Ohio State was an early -17.5 point road favorite with an over/under of 67.

The Buckeyes have shown no ill-effects without Urban Meyer and bettors are coming around on them after some lower spreads to open the season. With a clear path to the conference championship, they’ll likely be favored in every game the rest of the way. Their quest is to not slip up against lesser teams, which has been a problem in recent seasons.

While the Bucks could slip in this game, it’s hard to see that happening given how the Cornhuskers have looked. In addition to falling at Colorado a few weeks ago, they barely beat Illinois last weekend.

Quarterback Adrian Martinez was set for a huge season, but has been mostly boom or bust, completing 61.5% of his passes on 9.7 yards per attempt. Those are fine numbers, but he’s yet to face an above average defense.

The Huskers will try and lean on their ground game, but that probably won’t work as well in this game. In addition to Martinez’s 234 rushing yards, Maurice Washington (questionable to play) and Dedrick Mills have combined for 497 yards.

Similar to Nebraska, Ohio State hasn’t exactly played a great team, but Nebraska isn’t a great team and probably isn’t much better than Cincinnati or Indiana. Maybe that’s the case, but the one thing the Huskers have been able to do is score and some bettors likely think that could be enough to get the cover. If OSU lives up to its current numbers, allowing 60.3 rushing yards per contest, it could be a long day for the home team.

It’s a similar situation on the other end considering Nebraska just gave up 38 points to Illinois. Their hope is that the home crowd can change those fortunes because the Huskers will need everything going in this game to stop the Bucks from scoring with ease.

Justin Fields doesn’t have huge numbers through four games, but he hasn’t needed to do more with OSU hitting 42 points in each one. That said, he has 13 touchdowns with zero interceptions so he’s doing pretty much everything that’s been asked of him.

He also hasn’t focused in on one receiver with Binjimen Victor, Chris Olave and K.J. Hill all having at least 13 receptions and no more than 15.

Nebraska’s bigger test will be to limit OSU’s ground game, which is averaging 5.8 yards per carry. J.K. Dobbins has 477 yards and five touchdowns and he only had eight carries last game due to the blowout. Fields has 150 rushing yards and at some point, his mobility will come into play for this offense.

Nebraska will try and ride its home field advantage, but against a team better at almost every position, that usually doesn’t matter. Still, last year’s meeting can’t be overlooked as Nebraska stayed competitive in Columbus, losing 36-31 as a 17-point underdog.

If they can move the ball on the ground, similar to that game, they’ll be in business to at least get the cover. But so far, the Huskers haven’t looked like the same team from that loss.

The Buckeyes have covered in their last six against a team with a winning record, while the Cornhuskers are 6-1-1 ATS in their last eight in the Big Ten. Ohio State is 4-1 ATS in the last five meetings between these schools and the over is 4-1 in those meetings.