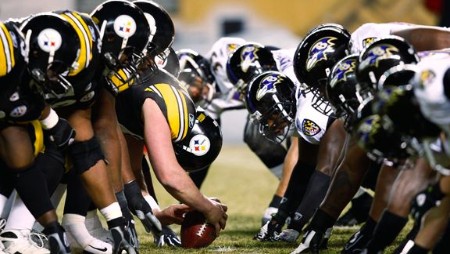 The Ravens are coming off a bad loss to the Cleveland Browns and they head to Pittsburgh as a rare favorite giving 3.5-points to the Steelers, who are coming off their first win of the season.

To say the public has been backing the Ravens would be an understatement, as they opened as a 4-point underdog and as of Wednesday are a 3.5-point favorite. The total for this AFC North matchup is at 44.5 points.

The Ravens lost to the Cleveland Browns in their last game 40-25 while the Steelers beat the Cincinnati Bengals 27-3 on Monday night.

Last season these division rivals split the two games facing each other with each winning on the road.

The Ravens are 4-0-1 ATS in their last five road games against the Steelers.

In their last game the Ravens forgot to show up on defense in their loss to the Browns where they were torched for 530 total yards. They did not look good against the pass or the run and they have lost two games in a row.

Lamar Jackson passed for 247 yards with three TD and rushed for 66 yards, but also had two INT and was sacked four times. He spread the wealth around in the passing game with six different players with at least 22 receiving yards with none having more than 61 receiving yards.

The Steelers rank 19th in the league in pass defense and 22nd in run defense and if Baltimore can play their game running the ball, with a rushing offense that ranks first in the league and playing good D they should win. However, they have given up 73 points in their last two games.

The Steel Curtain and the two-time Super Bowl winning Steelers of this millennium were led by their defense, but that defense has not been very good in the last few seasons. However, in picking up their first win of the season in their last game they held the Bengals to only three points and only 175 total yards.

Mason Rudolph passed for 229 yards with a couple of TD’s and no INT and while James Conner only rushed for 42 yards led the Steelers with 83 receiving yards.

Conner was great last season as a rookie, but he has failed to rush for over 43 yards in any game this season. He has an ankle injury but should play in this game.

Rudolph has six TD and only two picks on the season filling in for the injured Ben Roethlisberger. Surprisingly, the Ravens only rank 30th in the league in pass defense and in their loss to the Browns last week they gave up 337 passing yards as well as nearly 200 rushing yards.

The road team has covered the spread in the last five games between these teams.

The Ravens are 4-1 ATS in their last five road games.

Look for Jackson to have a big game in this one in the air and on the ground and for Baltimore to play good defense. They have faced two dangerous offensive teams in a row but without Big Ben the Steelers are not that.

Take the Ravens on the road giving the points, as they will win and cover snapping their two-game losing streak and sending the Steeler to their 4th loss of the season.

***Bettorsworld disagrees with Jason’s take here. We have the Steelers as a live dog with many of our models predicting a straight up Steelers win.