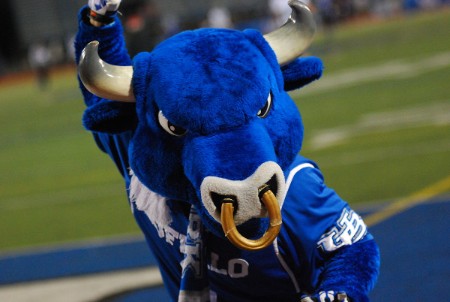 Temple heads to Buffalo to take on the Bulls as -13.5 point favorites to go along with a posted total of 53. Those odds are available at 5 dimes sportsbook.

Temple is riding high after last weekend’s win over #21 ranked Maryland. The Owl’s defense is holding teams to only 14.5 ppg. They were able to control the high flying Maryland offense that was averaging 71 points per game coming into Philadelphia last Saturday.

Owl’s QB Anthony Russo had a big game with 277 yards and 3 TD’s, finding his go to wide receiver Jadan Blue, who had 5 catches and 132 yards and 1 TD.

Buffalo is coming into this weekend on a 2 game losing streak, after losing to Penn State, whom they played tough and actually led at halftime and then losing to Liberty where they were 6 point favorites.

Temple won the game against Maryland thanks to 2 huge goal line stands, where senior linebacker Shaun Bradley made the tackle on two separate 4th down and goal situations.

The first one came with 3:27 left when everyone thought that was the end of the game, but after Temple was forced to punt and shanked it, that gave Maryland one more chance and Bradley stepped up once more for a huge tackle to seal the win.

The Bulls freshman QB Matt Myers has been thrown into the fire early on this season. He played okay against Penn State, going 16-31 with 245 yards and 1 TD, but now he will face the tough Temple D. He will hope to lean on the help of sophomore running back Kevin Marks, who is leading the team with 247 yards, coming off a solid game against Liberty where he reached the 100 yard mark for the first time this season.

Temple’s junior QB Anthony Russo is attempting to build upon last year, where he only had 13 TD’s and 13 interceptions. Thus far he has been able to control the mistakes as he only has 2 INT’s to go along with 7 TD’s

These two teams faced off last season and Buffalo won 36-29, as they were 4 point underdogs on the road.

Temple has covered both of their games this year against the spread, while Buffalo is 0-3 ATS. This week the line comes in at -13.5 in favor of Temple.