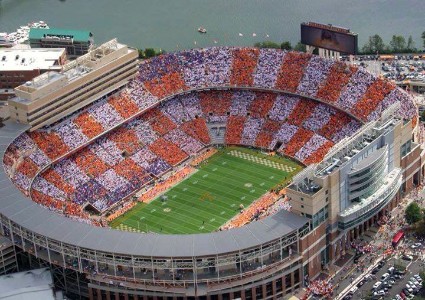 Last season Georgia State had a less than stellar one going 2-10 and they head into the season as major 26 point underdogs on the road in the season opener facing Tennessee.

The total for this non-conference game is set at 57.5 and these teams have not met since the 2012 season.

Tennessee also was a disappointment last season finishing 5-7, but they easily won both of their non-conference games against teams from a non-major conference.

The Panthers were 2-9-1 ATS last season and they did not face one team from a Power 5 conference.

The Volunteers were 5-7 ATS last season and they have failed to cover in five of their last six home games.

Can the D improve?

The Panthers have a legit attack and a veteran QB returning, but can their defense improve after ranking 124th, out of 129 FBS teams, in the nation last season?

Dan Ellington returns at QB after completing 60% of his passed for 2,119 yards and 12 TD with five INT and he also led the team rushing for 625 yards.

State did lose their top WR, but they have the other top producers from last season back and one key in this game will be the offensive line that has to give time to Ellington.

Tra Barnett (551 rushing yards 5 yards per carry last season) and Seth Paige (341 yards) are back and will face a Tennessee run defense that ranked 52ndin the nation last season. The Vols lost some key players up front and their defensive line is a concern, so Georgia State may look to run the ball often in this non-conference affair.

Key Pieces Back, on Offense at Least

Jarrett Guarantano is back under center, as are the two top RB’s in Ty Chandler and Tim Smith, who combined for 1,052 yards last season. WR Marquez Callaway is also back after leading the team in receiving yards last season and he averaged 16 yards per catch.

For this season opener at home the offense should be ok for Tennessee, but can the defense hold up? They had issues on D last season, but only gave up three points in their two non-conference games facing non Power 5 conference teams in East Tennessee State and UTEP.

The Panthers have nine of their top 11 tacklers returning and return seven starters, overall, on defense, but will experience mean improved play on D? GSU will find that out early in this game.

While Tennessee was not a great home bet last season Georgia State has failed to cover the spread in their last eight road games (0-7-1 ATS).

In the 2012 meeting between these two teams Tennessee throttled Georgia State beating them 51-13. The game may be closer in this season opener for both teams, but not by much. The Volunteers will have a big game running the ball and while they may give up some points they will still easily win at home and cover the spread.

Read our season previews for the Vols and Georgia State