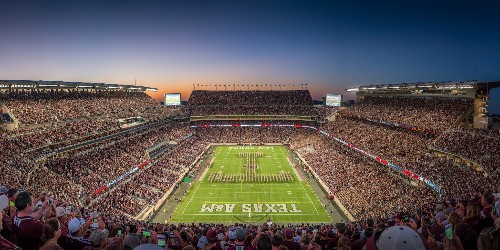 Texas A&M will host Auburn this week in a crucial SEC matchup with the Aggies favored by 3.5 and a total of 48 at 5 dimes sportsbook.

If either one of these teams wants to contend near the top of the SEC West, it’ll need to win this game. The odds are long for either to sweep LSU and Alabama, which means winning this game is needed.

It was a weird game when these teams met last year with home field coming into play for Auburn. Texas A&M won both sides of the ball, yet threw an interception and had a costly fumble. The Aggies led by 10 points entering the fourth quarter, but a few big plays later, Auburn won 27-24.

For Auburn to do that again, something has to change because it gave up 203 rushing yards while rushing for 19 itself. The other part is that Jarrett Stidham is gone and Auburn may not be able to rely on new quarterback Bo Nix.

Aggies Legit Despite Loss to Clemson

It’s hard to put A&M at fault for its lone loss against Clemson. In fact, this could still be a top-10 team despite the loss because of how good Clemson is.

The Aggies have the pieces to be elite with Kellen Mond at quarterback. While his numbers aren’t amazing (64.9% completion, 7.7 yards per attempt), he still has big-play potential and the game against Clemson didn’t help his totals.

Receivers Jhamon Ausbon and Kendrick Rogers have been stout and running backs Isaiah Spiller and Jashaun Corbin have led the way on the ground. Spiller’s 8.8 yards per carry could be a nice difference maker in this game if he gets going against a dominant defensive front.

Auburn had the same defense last year, yet A&M still had success running the ball and that matchup will probably decide this game. While Auburn has a good defense, points can still be scored against it, especially on the road. Oregon had some success in the opener and A&M can exploit that a little further if Mond is on his game.

For the Tigers to have a chance, they’ll need more from the offense, which has looked iffy at times. It doesn’t help that the Aggies also have a good defense and only gave up 24 points at Clemson.

It’ll be up to Nix to keep the chains moving and that’s not a certainty given his 52.4% completion rate on 6.5 yards per attempt. Because of that, Auburn will try and run as much as possible behind JaTarvious Whitlow (341 yards, 5.3 ypc).

The unfortunate part is that Auburn averaged less than one yard per carry in last year’s matchup (sacks included).

The spread is set like these two teams are equal on a neutral site. Yet, it wouldn’t be surprising if the defenses were on the same level and A&M’s offense has the leg up. Then you throw in A&M’s home-field advantage and the Aggies are the team to back.

However, the road team is 6-1 ATS in the last seven meetings with the over 5-2 in those games. Both teams have covered their last four games.