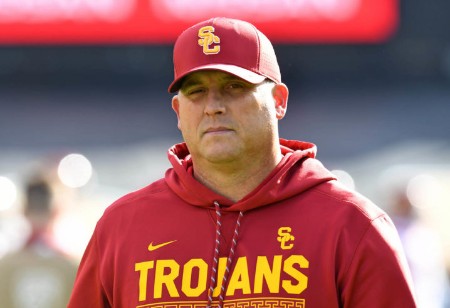 The USC Trojans kick off the 2019 college football season by hosting Fresno State as -13.5 point favorites with a total of 52.

This spread is a classic opening line for USC, a public team that has failed to cover its last three openers. USC may be better than Fresno State and playing at home, but it only beat two teams by more than 11 points last year.

USC at least has something going for it with quarterback JT Daniels still only a sophomore after posting 14 touchdowns and 10 INTs last year. That said, he still hadn’t officially won the job in mid-August.

Either way, the offense will look different with new coordinator Graham Harrell. Expect a lot more passing from whoever is the quarterback, as long as the line pulls it together after struggling through most of 2018.

As a team, the Trojans managed a subpar 4.1 yards per carry, something that has to improve for running backs Vavae Malepeai (501 yards) and Stephen Carr (384 yards). The good news for the quarterback is that Michael Pittman (18.5 yards per catch) and Tyler Vaughns (58 receptions) form a nice set of receivers, which should be a big help in the new offense.

Unfortunately for USC, Fresno State’s strong suit is on the defensive end where it allowed 13.7 points per game last year. Six starters return from that group with five of them being seniors so a huge drop off isn’t expected.

Due to the Fresno defense, there could be more money on the under in this game, especially after they held Minnesota to 21 points and UCLA to 14 last year.

The other reason for the under is that the Bulldogs might not have much of an offense. They averaged a solid 34.6 points per game last year (including 31 in a bowl win over Arizona State), but a new quarterback changes everything.

Jorge Reyna attempted 12 passes as a backup last year and prior to that, was quarterback for West Los Angeles College. The other problem is that the line returns one full-time starter, only adding to the pressure for the new QB.

Considering Marcus McMaryion threw 25 touchdowns to five interceptions last year, Fresno should have a decent drop off in that department. They’ll likely feed running backs Ronnie Rivers (743 yards) and Jordan Mims (436 yards) as much as possible, but again, the line with numerous underclassmen could be an issue.

Helping Fresno is USC’s defense, which only returns a handful of starters from a mediocre group that allowed 27 points per contest.

The Trojans have a nice base up front, but the secondary is almost completely new with a mix of freshmen and sophomores set to start. Of course, that may not matter if Reyna can’t run Fresno’s offense with efficiency in his first game as the starter.

Fresno Was Better Against Common Opponents

This game could turn into a USC blowout if Reyna isn’t up to the task for the Bulldogs, but that’s rarely happened for Clay Helton the last few years. Fresno’s defense should keep it lower scoring and competitive.