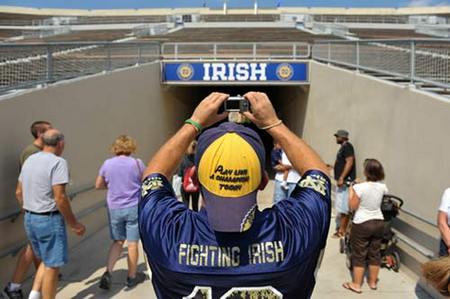 Notre Dame had a chance to upend Georgia last weekend, but couldn’t put together the final drive. While they covered, the Fighting Irish now have to win the rest of their games for a chance at the College Football Playoff. That starts with Virginia and they were an early -12.5 point favorite with an over/under of 48.5

Virginia is considered a favorite to win the ACC Coastal division, though that’s not saying much. The Cavaliers are undefeated, yet are coming off an unimpressive 28-17 win against Old Dominion.

Sure, they’ve already beat Pitt and Florida State, but they haven’t looked as good as some people thought they’d be, even without a loss. That’s because the offense hasn’t taken a step forward despite getting another year of quarterback Bryce Perkins.

Their overall numbers are fine, but a lot of that was from the 52 points scored against William & Mary. Even then, Perkins is averaging 6.8 yards per attempt to go with six touchdowns and four picks.

He also leads the team with 193 rushing yards, ahead of running back Wayne Taulapapa at 152 yards. The problem is that neither of them are averaging more than four yards per carry and that’s where Notre Dame’s defense has been having the most trouble.

But while the Irish are allowing more than 200 rushing yards per game, they held a dominant Georgia rushing attack to just 152 yards last game.

The mobility of Perkins could be a problem, but considering UVA hasn’t found much room against worse defenses, it’ll be even harder in this game.

The question will be what Ian Book and company can do against Virginia, who have yet to allow more than 24 points. Again, a lot of that is due to schedule, but Florida State could at least move the ball and put points on the board.

That said, the Irish still have an edge in that department with Book, who is averaging a solid 8.8 yards per attempt for eight touchdowns with both interceptions coming against Georgia.

His numbers don’t jump off the page, but he’s played three games and one of those came against one of the best defenses in the country. Still, Notre Dame’s offense has lacked explosiveness and taking them to win by more than 10 points will be tough.

Book is a playmaker at quarterback, but the running game is iffy. Book and top running back Tony Jones have combined for just 293 rushing yards.

Notre Dame may be better on both sides of the ball, but Perkins has the tools to keep the Hoos competitive no matter what happens for them defensively. Even if the Irish are leading the entire way, a late cover wouldn’t be surprising with Perkins working his magic.