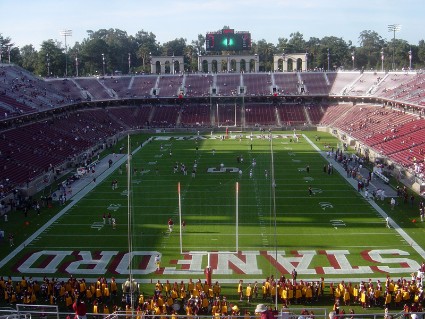 The Washington Huskies are on a 3 game win streak, fresh off of beating USC 28-14. It was a quiet day for star QB Jacob Eason as Washington instead relied heavily on the run with Salvon Ahmed, who had 17 carries for 153 yards rushing and 1 TD. That TD came on an 89 yard run when he showed his speed and just pulled away from everyone and went untouched into the end zone.

The Huskies defensive secondary really stood out Saturday and they seemed to bait backup QB Matt Fink into three interceptions including two that were near the goal line.

While Stanford got a much needed victory last week against Oregon State, were led by backup QB Davis Mills, who was filling in for an injured Costello. Mills got off to a hot start with all three of his touchdown passes coming in the first half to give the Cardinals a 21-0 lead.

One of the more exciting plays of the game came in the 4th quarter when Stanford called the “PHILLY SPECIAL” and converted it perfecting when Davis Mills when up and grabbed the catch to give Stanford a 28-14 lead.

Oregon State battled back and tied the game with 1:55 left in the 4th, but after a long kickoff return for Stanford they were able to get in FG range and Jett Toner nailed a 39 yard FG with 1 second left to win the game.

Stanford does not have their trademark stingy defense this year, as they have allowed nearly 30 points per game, while Washington is only allowing 17.4.

Stanford was in the middle of a three game losing streak before Saturday, and all three of the quarterbacks from USC, UCF and Oregon put up at least 3 passing touchdowns on the Stanford defense.

I am sure Jacob Eason is licking his chops waiting to play Saturday night to try and continue his hot start to the season, as he has 1243 yards passing with 10 TD’s.

The last 2 matchups between these teams have been close battles with each team winning once. Washington was the heavy 9.5 point home favorite last year, but only managed to win 27-23.

This year the spread is -14.5 for Washington on the road. Vegas clearly thinks Washington will roll, but night games at Stanford stadium always seem to get a little weird.

With Davis Mills able to get a nice quality start last week and see some success it could help his confidence this week and if David Shaw goes back to the old ground and pound playbook and shorten this game I can see Stanford keeping this one close.