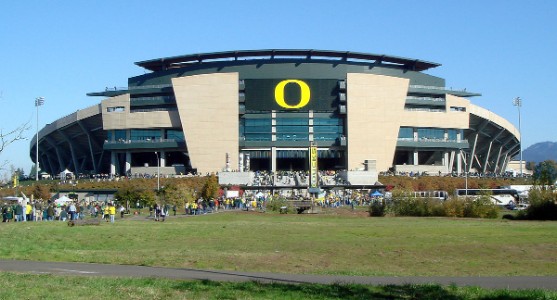 Oregon has its eye on the Pac-12 title game and possibly more if all goes well. The Ducks have a two-game lead in their division and as long as they play their game, it’s hard to see them losing the rest of the way.

Of course, Washington State has something to say about that and has won the last four meetings. Still, the Ducks were -14 point home favorites with an over/under of 65 as of Wednesday.

The Cougars have won recent meetings, but it’s hard to put anything into those. Their defense was better a year ago and that let them hold onto an early 27-0 lead en route to a 34-20 win.

This year could be different, considering they’ve given up 38 points in three of their last four and their lone good outing came against a struggling Colorado team.

Their offense is good, but against Utah, one of the better defenses in the Pac-12, they scored just 13 points. The other part of the problem is that Oregon is just as good defensively as Utah, giving up 11.9 points per game.

Everything will be up to quarterback Anthony Gordon against a defense allowing 178.6 passing yards per contest. Gordon leads the nation in terms of passing yards because of the Air Raid, though he’s been solid, completing 70.9% of his passes on 8.6 yards per attempt for 29 touchdowns and seven interceptions.

Easop Winston Jr. has been his top guy with nine touchdowns, but there are five other receivers who could lead the team in this game. Against better defenses, running back Max Borghi rarely gets carries, totaling 17 rushes for 82 yards in losses to ASU and Utah.

He’s averaging 7.3 yards per carry, but that doesn’t matter when Gordon throws the ball on almost every down. Either way, Oregon will have an edge in the trenches on both sides of the ball and that’s why it’s a two-touchdown favorite.

On the other side, Wazzu is allowing 439 yards and almost 30 points per contest. Maybe they figured something out against Colorado, but this is a tall task for a defense that already gave up 67 points to UCLA.

The Ducks have also gone up another level the last two games after struggling offensively against Stanford and Cal. They put everything on the table and scored 35 points against Washington and that could lead to about 40 points in this game.

They can attack however they want as Justin Herbert has been stout, completing 68.1% of his passes on 8.1 yards per attempt for 21 touchdowns and just one pick. He’s a smart quarterback and has a solid core of receivers in Johnny Johnson and Jaylon Redd and they did enough without injured Jacob Breeland last game.

But after not being able to run in this matchup last year, the Ducks should have their way whether it’s CJ Verdell, Travis Dye or Cyrus Habibi-Likio. This is a balanced offense that should put up points against Wazzu, unlike a year ago.