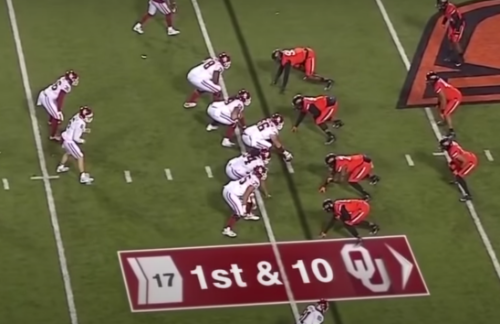 There are five teams with two losses or less fighting for the Big 12 title game and this matchup features two of them. At one point the favorite, Oklahoma State has a tough remaining schedule, while Oklahoma can’t lose again, already with two losses on the season. The Sooners, playing at home, opened as -7.5 point favorites with an over/under of 58.5.

After early-season issues, many view the Sooners as the best team in the conference. They let their lead slip late against the Longhorns, but since that game, they’ve been dominant, winning their last three by at least 19 points each.

While some of that has to do with schedule, it’s better than prior seasons when the defense had trouble against every opponent. In the last few games, they kept TCU to 13 points and held Kansas to nine points, its second-lowest output of the season. Combine that with some iffy OK State results and it’s easy to see why Oklahoma is favored.

The Cowboys are hoping to turn things around after a slew of ho-hum performances from barely beating KSU and ISU to losing against Texas. A lot of that is because of an under performing offense that hasn’t found the same success as a season ago.

Quarterback Spencer Sanders had an injury early and has struggled to figure things out, averaging 8.2 yards per attempt for five touchdowns and three picks while getting sacked 10 times in four games.

Receivers Tylan Wallace and Dillon Stoner are some of the best in the conference when they get the ball, but Sanders has struggled to find each of them and only threw for 108 yards in the last win.

That inefficiency has led to sub-par numbers for running back Chuba Hubbard, who has 581 yards and five touchdowns on 4.6 yards per carry (he averaged 6.4 ypc last season). He should be fine after suffering an injury last game, but if his touches are limited, LD Brown would likely step in for more work.

Can Cowboy “D” Slow Down Sooners?

Because of the offensive struggles, defense has been OK State’s strong suit, allowing 311.5 yards and 17.8 points per game. While that’s nice, it’s rarely a good idea to bank on defense against Oklahoma.

That’s kind of what happened last year when the Sooners won 34-16 behind 283 rushing yards. Sure, the Sooners can be slowed down, but they’ll get their points somehow, averaging 46.1 per game for the season.

Freshman quarterback Spencer Rattler has grown as the season’s moved along, averaging 9.7 yards per attempt for 18 touchdowns and six interceptions while adding three touchdowns on the ground.

He’s not as efficient as prior Oklahoma QBs, but he’s doing enough with a balanced receiving corps as three guys have at least 25 receptions (Marvin Mims, Austin Stogner, Theo Wease).

Maybe more importantly for this game is that OU has gotten more from the ground game in recent contests with Rhamondre Stevenson totaling 191 yards and five touchdowns on 24 carries the last two games. Throw in whatever T.J. Pledger and Seth McGowan do and it’s a diverse, three-headed backfield.

OK State’s biggest weakness has been against the run, allowing 142 rushing yards per game, albeit on 3.7 yards per carry. But if the running lanes that have been there in recent games aren’t open for Oklahoma, that would put more pressure on Rattler, who hasn’t really been needed in a few weeks.

The spread is large because of Oklahoma’s dominance, but OK State will definitely be up for this contest with massive Big 12 title game aspirations on the line.

The question is if the Cowboys are ready for the big stage and if the offense can find what they had last season when Sanders and Hubbard were torching opposing defenses. If not, it’ll be up to the OK State defense against Rattler and company.

One need only look at the common opponents here which in this case would be Iowa State, Kansas State, Texas and Kansas to draw the conclusion that Oklahoma State is a live dog in this one.

Anytime you can get +7 on a team that can potentially win outright, you have yourself a very solid long term winning proposition. We think that’s the case here.