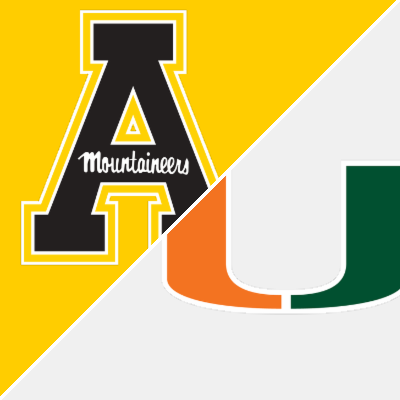 The Miami Hurricanes host Appalachian State on Saturday night, September 11th at 7 PM EST. Miami opened as a -8 point favorite and now sits at -9. The total is 54.5.

Miami is fresh off of a beat down at the hands of Alabama last week in a game many thought would be more competitive. Clearly Miami isn’t on the same level as the Crimson Tide.

But a year ago, the Hurricanes went 8-3. They were blown out by Clemson and North Carolina and lost a close one to Oklahoma State in their Bowl game. In their 8 wins they were able to extend some margins in games against teams with the similar strength of App State.

App State handled East Carolina last week 33-19. They are in off of a 9-3 2020 season. Two of their losses were to ranked opponents, Louisiana and Coastal Carolina by 3 and 11 points. App State also lost to Marshall 17-7.

This could be a situation where who each team played last week could help one side and hurt the other.

For Miami, they played the best team in the country. There’s not much shame in getting blown out by Alabama. For the Canes, it was no doubt frustrating to be bottled up like that. But they’ll find the execution of their offense to be much more smooth this week. Things that didn’t work last week, will all of a sudden work like a charm.

It’s just the opposite for App State. They played a very poor East Carolina team. They’ll find things that worked last week, won’t against the Hurricanes. Miami still attracts top talent and we’d expect that talent to be on display Saturday night.

Wish we jumped on the opener at -6 in spots. But still probably worth a play here. No harm in waiting to see if the number drops. Obviously stronger at -7 or better.