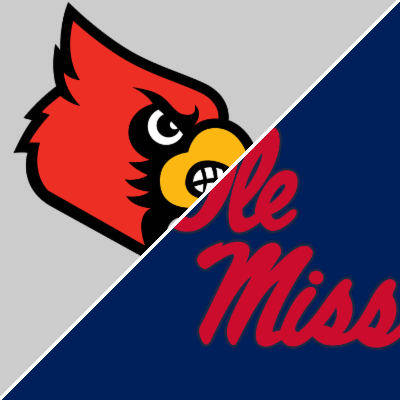 Ole Miss versus Louisville is a weird matchup to get on Monday night, but this is the game, and it gets ESPN treatment in the Chick-fil-A Kickoff Classic.

Despite being on a neutral field at Mercedes-Benz Stadium in Atlanta, Ole Miss was an early -9.5 point favorite with an over/under of 75.5 points.

Bet the game with reduced juice at BetAnySports

This is a weird matchup because the Rebels finished 5-5 last season and the Cardinals were 4-7. Neither team is expected to challenge at the top of the standings of their respective conferences, so this game would just be a nice win on the resume to begin the season. No matter what happens, there will be points, as seen in the over/under.

Ole Miss averaged 39.4 points per game and gave up 38.3 last season. Unsurprisingly, it’s expected to be somewhat similar in the new season because quarterback Matt Corral returns and while top receiver Elijah Moore is gone, that’s not expected to matter.

Dontario Drummond and Braylon Sanders are projected to be the next standout Ole Miss receivers, while running back Jerrion Ealy returns after averaging 5.1 yards per carry with nine touchdowns. As for Corral, he threw 29 touchdowns and 14 picks while rushing for 506 yards and four more touchdowns.

This offense will score points, there’s no question. Most of the pieces are back from when they scored 48 points against both Alabama and LSU. They’re favored because Louisville’s defense lost half of its starters from last year’s group including the majority of the back end. With new linebackers and secondary, Louisville faces a tall task in the opener.

Back Door is Open

That said, there’s still a chance for Louisville to either stay competitive or get a late cover. The Cardinals may not be as electric offensively, but they get back their quarterback in Malik Cunningham and at their peak, they were a problem for opponents, dropping 40-plus points on FSU and Wake Forest.

Similar to Corral, Cunningham has to improve his turnover numbers after posting 20 touchdowns and 12 picks to go with 609 rushing yards and seven more touchdowns.

Jalen Mitchell and Hassan Hall take over in the backfield, while new receivers have to show up outside of tight end Marshon Ford. Clearly, there are more questions for Louisville, but Cunningham is a guy to put money on, especially when the spread is close to 10 points.

There’s at least some hope for the Rebels defensively because they showed up in the bowl win against Indiana and also get back their tackles and majority of the secondary. Still, this is a group that gave up loads of points to everyone.

Now against a versatile quarterback in Cunningham, it’s expected both of these teams will reach at least 30 points. The Rebels have some hope defensively and that may be the reason they open this game up, but given how they looked last year, it wouldn’t be surprising if the Cardinals kept up on the scoreboard.

All indications are that this game will be a shootout. In that type of a game, good sized underdogs present us with some value. The potential for the straight up win exists, as does a back door cover. We’d prefer to wait for at least +10. As of this writing on August 9th, there are +9.5’s across the board.