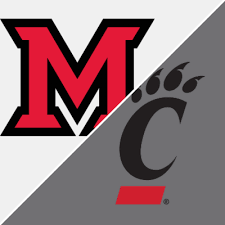 In state rivals Miami Ohio and Cincinnati will do battle on opening day, Saturday September 4th when the Bearcats host the Redhawks as 23 point favorites and a posted total 51.5 at BetUS Sportsbook.

Cincinnati opened as a -19 point favorite when lines were first posted and it’s been a one way street of betting action, all on the Bearcats ever since. Is it warranted? Perhaps.

This series has been dominated by the Bearcats. They have won 14 straight, 7 straight at home. The average score of those home wins was 37-15. An average margin of 22, right around the current number.

Cincinnati was 8-0 in regular season play last season and won the AAC Championship game over Tulsa, 27-24. That set up a Peach Bowl appearance against Georgia in which the Bearcats covered as a +7 point dog, losing the game 24-21.

The Bearcats can play and they return 7 starters on each side of the ball for 2021.

Miami Ohio on the other hand only played 3 games last season. They went 2-1, beating Ball State and Akron and getting blown out by Buffalo (42-10). So, we can’t tell much from 2020.

But we do know that Miami Ohio was 6-6 in 2018 and 8-6 in 2019. Headed in the right direction. We also know they are loaded with returning talent, 9 on offense and 10 on defense. Most think the Redhawks will be a contender in the MAC this season.

There’s a huge disadvantage for Miami Ohio having played just 3 games going up against an experienced team that played 10 games with one of those being on January 1st.

We think Cincinnati is probably the right side here. Sharp bettors took the Bearcats at -21 back in the beginning of July. We’re hesitant to lay anything over -21 though.