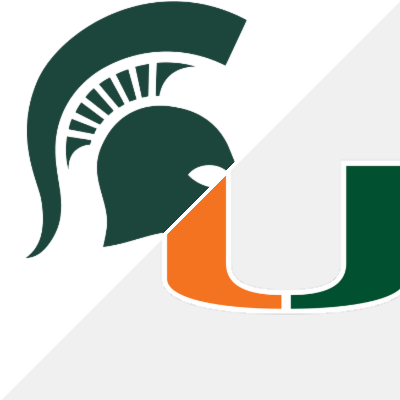 The Miami Hurricanes host the Michigan State Spartans on Saturday September 18th. Kickoff is scheduled for 12 PM EST and the game can be seen on ABC. Miami is a -6.5 point favorite early in the week with a total of 55.5.

Stop throwing money away! Bet with reduced juice at BetAnySports

The Spartans come in red hot and confident after a 2-0 start, already duplicating last years win total. They knocked off Northwestern 38-21 on the road and beat Youngstown state at home 42-14. A win over Miami would certainly grab headlines.

Big things were expected from the Miami Hurricanes in 2021. It’s essentially the same team from a year ago that went 8-4 as they are stacked with returning talent. But so far in 2021 those big things haven’t materialized.

Hurricanes Have Something to Prove

Many college football observers thought that perhaps Miami would give Alabama a battle in their opener. But instead, they were blown out 44-13. Ok. No big deal. After all, it was Alabama.

Most thought that the Hurricanes would bounce back in a big way last week against App State. Not to knock App State, but they allowed East Carolina almost 300 yards through the air the previous week. Surely Miami and D’Eriq King would surpass that, right?

Wrong. Miami had 200 through the air last week. It took a field goal with 2 minutes left in the game, which almost missed, to squeak by App state by a score of 25-23.

We think the Spartans show up again this week and keep this game close throughout. Based on what we’ve seen from both teams early, we can’t rule out an upset.