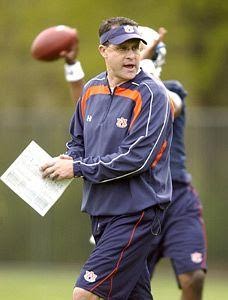 The Auburn Tigers and the Oregon Ducks will square off at AT&T Stadium, home of the Dallas Cowboys, On August 31st at 7:30pm est. The Tigers are -3 point favorites with a total of 57 at 5 dimes sportsbook.

This game is the most heavily bet college football game of all opening week games. WHy not? It’s should be a heck of a game.

We’ll get a decent idea of how good both Oregon and Auburn are after the first week. The Ducks are suddenly one of the favorites to win the Pac-12 and while a loss won’t thwart those efforts (Washington lost to Auburn and won Pac-12 last year), it won’t be a good look for the Heisman hopeful quarterback.

Ducks Have Edge at QB

It’s somewhat surprising Oregon isn’t favored with a huge edge at quarterback. Justin Herbert is back for another year after throwing 29 touchdowns and eight picks in his junior campaign.

Those aren’t amazing numbers, but he’s a Heisman candidate and possible No. 1 pick in next year’s NFL Draft. Throw in a stout line with every starter returning to go with standouts at skill positions and this offense has the potential to explode.

Auburn Has Edge on Defense

Auburn’s defense should provide solid resistance with a lot of pieces back after allowing 19.6 points per game last year. Nick Coe and Marlon Davidson are beasts on the edges while they return everyone in the secondary, highlighted by senior safeties Jeremiah Dinson and Daniel Thomas. However, linebacker is mostly new and that could be an issue in the opener.

The other issue is that the Tigers will be starting a freshman at quarterback, either redshirt Joey Gatewood or true Bo Nix. Even with Jarrett Stidham at quarterback last year, the group was still inconsistent, barely averaging 30 points per game.

They’ll try and lean on a line which returns every starter from a mediocre group. Along with the new QB, Auburn is working with new top receivers in Seth Williams (26 receptions) and Anthony Schwartz (22 rec.).

Top running backs JaTarvious Whitlow and Kam Martin are still there, but neither had overwhelming success last year as the team averaged 4.3 yards per carry.

Auburn’s Running Game Could Decide it

Oregon’s defense has a new coordinator, but Andy Avalos comes with a solid pedigree after years spent at Boise State. While they lost some key pieces, stud linebacker Troy Dye returns for his senior season with Bryson Young, as well as a stocked secondary.

The bigger question is what the line can do against Auburn’s rushing attack because that could decide the game. If the Tigers find room to run, that’ll keep Herbert off the field.

Still, the Tigers are favored partly because they come from the SEC and the Ducks mostly under performed last year, losing big to Arizona and home against Stanford. The seven points they scored in the bowl game were also a letdown, even if it was a win.

But the underdog has the stud quarterback and the favorite has a freshman, which could be enough for an upset.

Read our season previews for Oregon and Auburn.