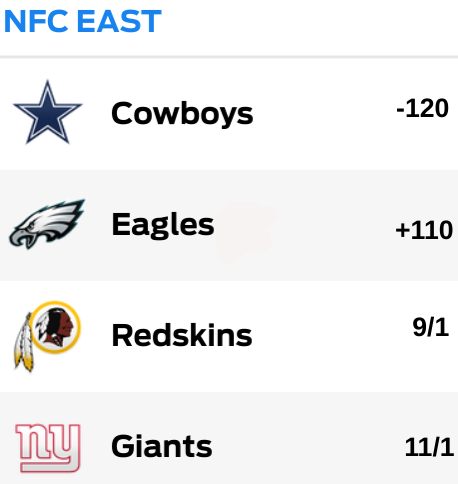 The current odds to win the NFC East have this division as a two team race between the Eagles and Cowboys. The odds project the Redskins and Giants to battle it out for basement honors.

The Eagles (-120 odds to win NFC East) made the playoffs last season with another great season-saving effort from backup QB Nick Foles. Foles bolted the City of Brotherly Love to lead the Jacksonville Jaguars.

Carson Wentz has been injured in the last two seasons during Philly’s playoff runs, including their Super Bowl run. He was still handed a HUGE contract extension. He has the weapons and the team went out and got WR DeSean Jackson and solid ex-Chicago RB Jordan Howard. Can Wentz stay healthy for the whole season?

Last season the defense for the Eagles only ranked 23rd in the league, but they made some solid off-season moves. They signed Malik Jackson, Zach Brown, and Vinny Curry, but the pass D, which ranked 3rd to last in the league last season, may still be an issue.

The early season schedule is not cake, but none of the teams they face in their first six games made the playoffs last season.

Can the Cowboys Put it Together?

America’s Team (+110 odds to win NFC East) won the NFC East last season and have all the parts, but can they put it together?

Dak Prescott was solid last season and is still looking for a big contract. He will have WR Amari Cooper for a full season, and Ezekiel Elliot led the NFL in rushing last season. On top of that Dallas ranked in the top 10 in the NFL defending the pass and the run.

The Cowboys seem to have it all AND they added WR Randall Cobb and future Hall of Fame TE Jason Witten un-retired.

Early in the season is key for Dallas, as their first two games are division ones against the Giants and Redskins. They then host the Dolphins before being tested facing the Saints and Packers.

The Redskins (9/1 odds to win NFC East) have some issues, but the big one is who will be the QB. Alex Smith is still out, they brought in Case Keenum, and they had Dwayne Haskins fall to them with the 15th pick in the draft.

Will they go with him right off the bat? The Skins have a solid RB corps, but the same cannot be said about the WR corps. TE Jordan Reed simply cannot stay on the field with heath issues.

Landon Collins and Joe Bostic were solid pickups for a Washington defense that ranked 17th last season. DE Montez Sweat was a good pick late in the first round of the last draft.

Still, the QB issue is a big one. Can Haskins be the guy in DC with a chip on his shoulder falling in the draft?

The Giants (11/1 odds to win NFC East) won five games last season have gotten less than stellar play from Eli Manning for the last few seasons. They will stick with him again this season.

The Giants chose QB Daniel Jones with the 6th pick in the draft but he will sit this season. That was a head-scratching pick.

Stud Odell Beckham Jr. is gone, but they have a star in Rookie of the Year RB Saquon Barkley.

The D in the Big Apple only ranked 24th in the league. Landon Collins led the team in tackles and is now with the Skins.

New York has Manning again, a suspect defense, and a high draft pick at QB sitting on the bench. The New York fans may be in for a long season, but at least they can see Barkley highlights.