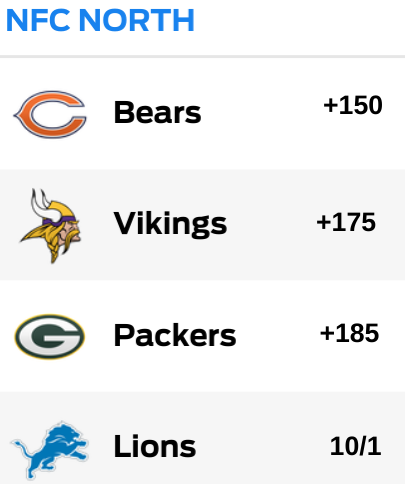 The odds to win the NFC North suggest that this division will be one of the most competitive in the entire NFL. Three teams, the Bears, Packers and Vikings are all listed at less than 2 to 1 odds to finish in 1st place. Only the Lions will be left out of the race, currently listed at 10 to 1 odds.

Can Bears Ride their D to the NFC North Title?

Last season the Bears (+150 odds to win NFC North) won the NFC North with a defense that ranked 3rd in the league. The offense only ranked 21st and the team in the Windy City will likely rely on their D again.

QB Mitchell Trubisky was decent last season, but the WR corps does not have big-play guys and the RB position may be an issue with Jordan Howard gone.

RB David Montgomery was a 3rd round draft pick. He along with Mike Davis and Tarik Cohen have to get it done on the ground. Trubisky cannot carry the team with his arm.

Khalil Mack was a monster in his first season in Chicago. He led a defense that ranked 1st against the run and 7th against the pass.

The Defense will be key for the Bears since their offense will not be a dynamic one and face the Packers and Vikings, who they play in two of their first four games, in the division.

Since Aaron Rodgers has been the starting QB for the Packers (+175 to win the NFC North) they make the playoffs when he is healthy and on the field and not when he is injured. He was injured last season and the squad was 6-9-1.

RB’s Jamaal Williams and Aaron Jones are a good duo and Davante Adams leads a pretty good WR corps. The line has to play better than last season and Rodgers needs to stay in uniform and not in street clothes.

The defense for Green Bay ranked 18th in the league last season. There are many new players on that side of the ball including their top two draft picks of DE Rashan Gray and S Darnell Savage Jr. Both were first round picks.

Rodgers and the Pack face a tough early season schedule, as in four of their five games they play the Bears, Vikings, Cowboys, and Eagles.

Round 2 for Kirk Cousins in Minnesota

After Kirk Cousins signed a massive contract for the Vikings (+185 to win NFC North) they failed to make the playoffs even though he did pass for 4.298 yards.

The WR duo of Stefon Diggs and Adam Thielen each had over 1,00 receiving yards, but the run game, which ranked dead last in the NFL last season, needs to help out. Dalvin Cook (615 yards) missed five games last season. He needs to stay healthy and the team hopes 3rd round pick RB Alexander Mattison can help out in that department.

Minnesota ranked a legit 4th in the league on defense last season. While that unit should be good this season, Cousins and the run game need to be better than last year. Like the Packers, the Vikings have a tough go of it out of the gates facing the Falcons, Packers, and Bears in three of their first four games.

The Lions (10/1 odds to win NFC North) finished with six wins last season and Matthew Stafford had one of the worst seasons of his career.

In the off-season he was given the weapons of TE Jesse James and WR Danny Amendola and he needs to bounce back. Otherwise Detroit may be looking for a new signal caller in the not-too distant future. He makes big money and has produced exactly zero playoff wins. RB Kerryon Johnson rushed for over 600 yards even missing six games and his heath is key.

The Detroit defense was pretty good last season ranking a respectable 10th in the league. Four of their first five draft picks were defensive players.

While the other teams in the division have a tough early-season schedule the Lions may have the toughest. After they open the season on the road against the Cardinals, they then play the Chargers, Eagles, Chiefs, Packers, and Vikings.