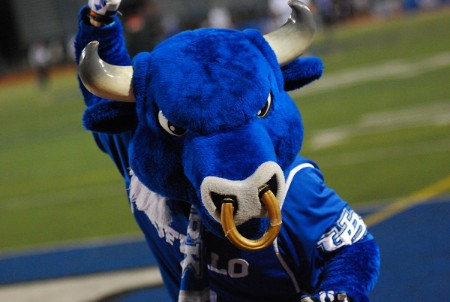 One year after winning 10 games the Buffalo Bulls are projected to win just 6 this year, that according to their win total betting line. The Bulls are also listed at odds of 13 to 1 to win the MAC for the 2019 college football season.

The problem is that the Bulls still lost their final two games of the season in the MAC title and Dollar General Bowl.

There’s no telling how the quarterback situation will play out with Tyree Jackson (34 total touchdowns) gone. Former backup Kyle Vantrease is the expected starter, but he’s seen limited time in two years and could easily lose the job to more mobile or younger options like Dominic Johnson, Matt Myers or Trevor Bycznski. The situation likely won’t be decided until the fall and even then, it could be a work in progress.

The questions in the passing game should lead to running the ball even more between sophomore backs Jaret Patterson (946 yards, 13 TDs) and Kevin Marks (805 yards, 12 TDs).

The question is if the holes between the tackles will be as big without Jackson under center. To help, the line returns four players with starting experience and that should keep the offense relevant, though maybe not at 2018’s levels.

To have a chance at the East division again, the defense has to come close to last year’s 24.7 points per game allowed. The problem is that all of the studs from that group are gone.

The defense will be built around sophomore linebacker James Patterson, who started every game as a freshman. Guys like end Taylor Riggins and corner Aapri Washington have potential, but they’re still counting on a lot of new faces, which doesn’t mesh well with a new quarterback on the other side of the ball.

Could Bulls Miss Out on Bowl Game?

The Bulls could reach three non-conference wins again if they can get past Temple, though that’s best-case scenario with a worse offense. It’s also a nice boost to avoid the best teams in the MAC on the road with Miami and EMU maybe being their toughest road trips.

Of course, that means Buffalo hosts the best teams with Ohio and Toledo both coming to town. This season could go a number of ways with anywhere from five to eight wins possible.

The running game should lead to at least five wins by itself, but the questions at quarterback could prevent them from challenging the best teams in the MAC.

To surpass six wins, the Bulls will likely need at least two non-conference wins to go with a couple road wins in the MAC.

Follow the links below in the schedule for previews of both Penn State and Temple for the 2019 college football season.