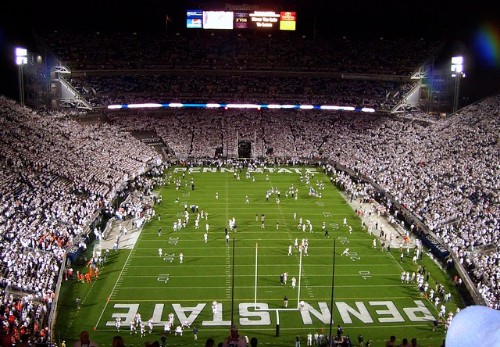 15th ranked Penn State heads into Week 2 as a big 29.5-point home favorite hosting Buffalo with a total of 57. The game opened as low as -21 (betonline) but books were bombarded with Penn State money forcing the move.

The Bulls will be facing a Nittany Lions team that are not only big favorites but had an opening game last week where they throttled Idaho beating them 79-7.

Buffalo failed to cover in their win over Robert Morris, but not only have they covered in five of their last seven road games but have covered the spread in their last six games facing teams from the Big 10.

Penn State has been a solid home bet in the last few years going 16-5-2 ATS in their last 23 home games. They have also won their last 15 non-conference games.

Can the Run Game Work against Penn State?

In Buffalo’s win over Robert Morris they had 354 total yards rushing for 285 yards, but can they run the ball facing Penn State? That is a big question and against Idaho PSU only gave up a grand total of four rushing yards.

Jaret Peterson led the Bulls with 90 rushing yards averaging 7.5 yards per carry and Kevin Marks chimed in for 75 yards on a 5.8 per carry average.

The Bulls started freshman QB Matt Myers and while was only 5/10 for 69 yards, he had two TD passes and was not picked off.

Buffalo did win 10 games last season, but only have one win over a ranked team since joining the FBS in 1999. They are 0-10 facing ranked teams on the road and in those games, they gave up an average of 43.2 ppg.

The Bulls have not faced a ranked team since the 2016 season when they lost 38-0 against Western Michigan.

In Penn State’s blowout win over Idaho they outgained them 673 yards to 145 yards and had balance with 342 passing yards and 331 rushing yards.

Sean Clifford passed for 280 yards with two TD and no picks and WR KJ Hamler had 115 receiving yards and pulled down both scoring passes from Clifford.

The Nittany Lions had five players rush for at least 38 yards led by Devyn Ford led the team with 107 rushing yards with 81 of them coming on one carry.

Penn State has a new QB and new lead RB and the first game was a great one to give the young guys confidence.

Dating back to last season Buffalo has failed to cover the spread in four of their last five games. Penn State is 7-2-1 ATS in their last 10 non-conference games and that trend will continue.

While Penn State will not win by 72 points like they did in their season opener they will crush Buffalo. They will have a good offensive game, but the key will be their defense, which will shut down the Bulls rushing attack. This game may get ugly quick, as the Nittany Lions will easily win in their house and cover the spread even giving 29.5 points.