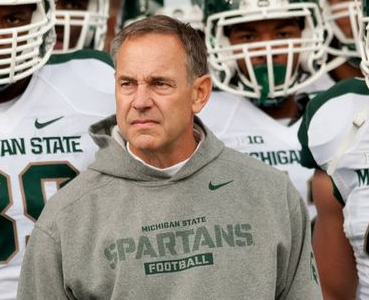 Michigan State will host Western Michigan Saturday, currently as -16 point favorites, down from an opening line of -17.5 at 5 dimes and betonline. The total is 46.5.

Early money has been on Western Michigan. Bettors are likely zeroing in on the fact that while the Michigan State defense is legit, the offense looks as though it may have trouble putting teams away.

Bettors are likely also keying on the fact that is you gave Western Michigan +16 points the last 3 times they played the Spartans (2013, 2015, 2017) they would have covered all three.

Last season Western Michigan was 7-6 losing to BYU in the Potato Bowl. The Broncos easily beat FCS Monmouth 48-13 in their last game, and they have covered the spread in five of their last seven games facing teams from the Big 10.

The Spartans have failed to cover the spread in their last five non-conference games including not covering last week in their season opening 28-7 win over Tulsa where they were a 22-point favorite.

Can the Broncos Air it Out Again?

In their blowout win over Monmouth Western Michigan had 368 passing yards, but in this game facing an MSU defense that only gave up 153 passing yards in their win over Tulsa.

Jon Wassink had five TD and no picks in the game, DaShon Bussell led the team with 116 receiving yards, and Giovanni Ricci had 97 receiving yards and two TD.

The Broncos did not have much of a run game in the blowout win with only 92 yards on the ground with LeVante Bellamy  leading the way with 53 yards, but only averaged a paltry 2.9 yards per carry.

WMU’s offensive line will have to play big in this game since the Broncos’ strength is the pass game and it is vital that they keep Wassink upright now allowing the Spartans in the backfield.

Offense not Great, but Defense is

In the win over Tulsa Michigan State only gave up 80 total yards and held the Golden Hurricanes to -73 rushing yards.

The defense led the way for Michigan State in the easy win, but they only scored one offensive TD. Brian Lewerke was decent under center passing for 192 yards with a TD and no INT but led RB Connor Heyward only averaged 2.9 yards per carry and only had 43 yards on the ground.

The Spartans may have one of the best defensive lines in the nation, but their offense still needs to get it going. They were not impressive in the run game and they were held to only three points after the half.

While the Broncos are 5-2 ATS in their last seven games facing Big 10 teams one of those games they did not cover was two seasons back against Michigan State.

The Broncos will give the Spartans a game in this one, as they be able to move the chains through the air. The MSU defense will be main difference maker not giving up a lot of points, but their offense will not score many as well. Michigan State will get the W, but Western Michigan will cover the big spread.

Read our season previews for Michigan State and Western Michigan