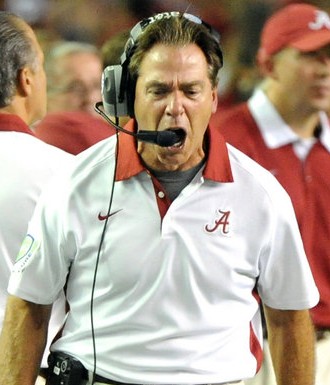 Alabama will host New Mexico State on Saturday, September 7th as huge 55 point favorites with a current posted total of 64 at 5 dimes sportsbook.

Things are going to get ugly. Alabama had no problems in the opener, covering in a 42-3 mostly easy win. It was the opposite for New Mexico State, which couldn’t do anything right in a 58-7 loss to Washington State.

This spread is as big as it gets and there still won’t be many people betting on the Aggies. It was a similar situation early last year when Alabama beat Arkansas State by 50 points.

The problem with a spread this high is that backups could be in the game as early as the third quarter. While Alabama’s backups are probably better than NMSU’s starters, that still doesn’t help in covering a 55-point spread.

To cover, the Crimson Tide may need up to 40 points in the first half and that should be possible. Tua Tagovailoa had no issues against Duke, throwing for four touchdowns on 10.8 yards per attempt.

Surprisingly, the ground game didn’t get going en route to 3.5 yards per carry, but that didn’t matter in the end. That is likely to change as Najee Harris and Jerome Ford will have an easier time finding running lanes against this defense.

N. Mexico St Allowed Points Every Drive But One!

NMSU gave up 5.6 yards per carry (mostly from a 54-yard run) to a team who rarely runs the ball. The problem is that Wazzu scored on all but its final drive, yet still only managed 58 points. There’s no question Alabama can reach 50 points, it’s more of a matter of them scoring a touchdown on every drive or settling for a field goal or two.

The other part is that New Mexico State is still going to try and run the ball, which is why it had 25 carries (sacks included) in the loss to Washington State. Even if the Aggies don’t get many first downs, churning the clock won’t help Alabama’s chances of covering.

NMSU quarterback Josh Adkins can’t turn the ball over after tossing two picks in the opener. If he plays it safe, that could be the difference in covering or not.

The Total May Be The Way To Go

The Aggies won three games last year and gave up more than 40 points per contest. Alabama will surely capitalize early in this matchup, but if it’s not winning by 50 points by the time backup quarterback Mac Jones comes in, bettors won’t want to watch.

Any time you’re hoping a team gets out to a 56-0, you’re asking for a lot. There’s no question the Tide have what it takes to cover, but it won’t be easy to win by that amount with most of the starters set to sit the majority of the fourth quarter.

Betting the total may be the way to go in this one. There’s a pretty good chance that New Mexico State won’t score at all. So, if you think Bama can hang 64 points on the board, the over is the way to go. If you think they can’t, well, than the under is calling your name.