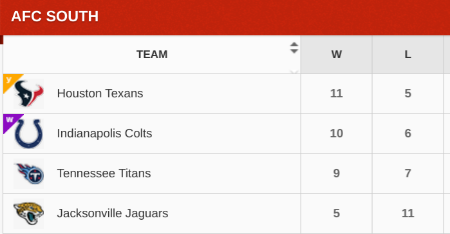 ***Note – Andrew Luck retired on 8/24/19 – That obviously changes the dynamics of the Colts season as well as the odds. That said, Jacoby Brissett is a talented kid and last we checked, the rest of the rest of the line up did NOT retire. There may be some value playing the Colts early in the season.

The Indianapolis Colts are favored to win the AFC South division in 2019 with current odds of -120. The Texans, Jaguars and Titans are all expected to be in the mix this season as well.

The Colts finished 2nd to the Houston Texans last season, but still made the playoffs, and BetOnline has them as the team to beat this season in the AFC South.

Last season Andrew Luck won Comeback Player of the Year and he had a lot of help, especially from a line only allowing him to be sacked 12 times. T.Y. Hilton had nearly 1,300 receiving yards and Marlon Mack rushed for 900 yards. WR Devin Funchess was a solid pickup in the off-season, but the season hinges on Luck and an O-Line in-tact to keep him upright.

The Indy (-120) D was solid, if not great last season, ranking 11th in the league and while they did not do much to bolster that unit, they signed sack specialist Justin Houston and drafted CB Rock Ya-Sin early in the 2nd round.

The Colts early season schedule is not killer, but isn’t easy either with their first two games on the road, with their opener against the Chargers, and then hitting the road again in Week 5 to play the Chiefs.

Keep Watson off his Butt

The Texans (5/2) won the AFC South last season with DeShawn Watson passing for over 4,100 yards and rushing for over 500 yards even though he was sacked 62 times. The team used their 1st and 3rd round picks to improve the O-line and if that line is better Houston’s offense will be one to watch. They have star WR DeAndre Hopkins and serviceable RB Lamar Miller with Watson entering his 3rd season he may be in for a big one.

Houston ranked 12th in the league on defense last season, but can J.J. Watt stay healthy and get back to dominance and can Jadeveon Clowney be happy with no new contract?

The Texans have a tough road to hoe early with two of their first three games on the road facing the Saints and the Chargers.

3rd time in a row for Foles?

The Blake Bortles era for the Jaguars (5/1) is over and can Nick Foles save a team for a 3rd straight season? The Jags bottomed out last season after making the AFC title game the year before and they hope Foles can bring them back.

RB Leonard Fournette has to have a big year after being a major distraction and disappointment last season. Jax does not have a great WR corps and Fournette is a big question mark, as is Foles, who is now back as a starter where he has excelled only one season in the league.

The Jaguars had a good draft taking OLB Josh Allen with the 7th pick and their defense ranked a solid 5th last season. Still, like the last several years, the offense has to step up.

Make or Break for Mariota

This may be a make or break season for Marcus Mariota, who has not stayed healthy and not gotten the Titans (11/2) past being pretty good. RB Derrick Henry came on huge late last season and while the WR is not a great one it is solid, and they may have gotten a steal in 2nd draft pick WR A.J. Brown.

Tennessee ranked a legit 8th in the league on defense last season, but they are in the same boat as the Jags with offensive question marks. Two of their first three games are on the road facing the Browns and the Jags and their 2nd game is facing Indy at home.

Use yards per play to make your own NFL Line

Use yards per point to handicap NFL and College football