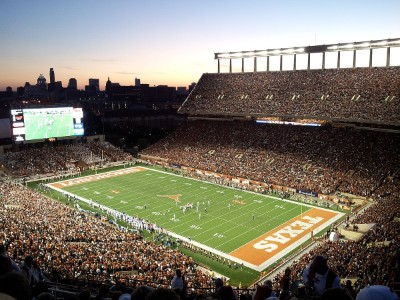 Texas is the 10th ranked team in the nation and plays host to Louisiana Tech in both team’s season opener. The Longhorns are a big betting favorite at -20.5 with a total that sits at 55.

This is the first ever meeting between these two teams.

Tech was a solid 8-5 last season and while they won the Hawaii Bowl they stumbled late in the season losing three of their last four games.

The Bulldogs were 7-6 ATS last season and while they did not face a team from the Big 12, they have lost their last 10 games facing teams from that conference.

Texas is a powerhouse football program that has not been that for some time. Will this season be any different? They were 10-4 last season highlighted by a win over Georgia in the Sugar Bowl.

The Longhorns were 6-7-1 ATS last season and they have an 18-game winning streak facing teams from Conference USA.

Tech has high hopes this season and with good reason since they return their QB as well as their top rusher and receiver and their top three tacklers.

Texas’ defense was legit against the run last season, but only ranked 110th in the nation against the pass. They lost nine starters on D including all seven front line players and two cornerbacks.

2018 Freshman All-American S Caden Sterns is back, but there are a lot of new faces on the Longhorns’ defense and they will be tested in this game by the Bulldogs.

Hall of Famer Throws Fuel into the Fire

Texas has a lot of bulletin board material for this game with Hall of Famer and former Tech QB Terry Bradshaw and current Cleveland Browns QB both recently taking shots at Longhorns QB Sam Ehlinger.

Bradshaw said about Ehlinger that “he aint that good.” Well, he was pretty good last season passing for 3.292 yards with 25 TD and 5 INT and he also rushed for 482 yards.

Keaontay Ingram rushed for 708 yards last season and is back and the team is high on freshman Jordan Whittington and they will split time in the backfield.

Texas lost their lead WR to the NFL, but still have a good corps led by 6’6” matchup nightmare Collin Johnson, who pulled in 68 catches for 985 yards and 7 TD last season.

The Tech defense was a good one last season and returns many key players. However, in their two games facing Power 5 conference teams they gave up a total of 83 points.

The Longhorns are 18-0 in their last 18 games against Conference USA teams and the Bulldogs are 0-10 in their last 10 games facing teams from the Big 10. Those streaks will not be broken in this game, but with the experienced offense that Tech has and the issues on D Texas has the Bulldogs will cover the spread.

***Note from Bettorsworld – we agree with Jason’s pick here. Consider this unique dynamic as well. Texas has LSU next week.  Can you say “Look Ahead”? Meanwhile, La Tech has Grambling.

This is by far the biggest step up in class and the most high profile game La Tech will play this year. It’s a dangerous spot for Texas.

Read our season previews for Texas and La Tech