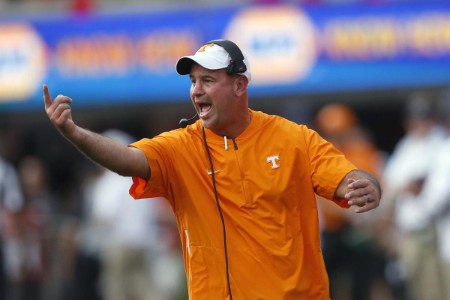 Both BYU and Tennessee lost their season opener and in Week 2 the Volunteers are a 3.5-point home favorite with a total sitting at 50.5 at 5 dimes sportsbook.

While it was no surprise that BYU lost their opener facing a top 25 Utah team Tennessee was shocked in their first game losing at home to Georgia State.

This is the first meeting between these teams.

While BYU has covered the spread in eight of their last nine road games, they have failed to cover in their last eight games facing teams from the SEC.

The Volunteers were a 24.5-point home betting favorite in their season-opening 38-30 loss to Georgia State and they have failed to cover the spread in four of their last five non-conference games.

Better Against the Run – Better Holding onto the Ball

Needless to say, BYU has to defend the run better and avoid turnovers, which they did not do in their 30-12 loss to Utah in their first game. They gave up 262 rushing yards and had three turnovers while not forcing any.

The Cougars only gave up 106 passing yards to Utah, but the Utes did not have to pass the rock running rampant and averaging 5.5 yards per carry.

BYU had 300 total yards in the Utah game with Zach Wilson accounting for most of them passing for 208 yards and rushing for 43 yards. Wilson was 21/33 but had two INT, which were both returned for TD’s, and did not have a TD.

Ty’Son Williams led the Cougars with only 45 rushing yards and he also lost a fumble.

The game against Utah was closer than the score indicated, as BYU was in it, but their three turnovers led to 20 Utah points.

Flabbergasted to say the least

Tennessee was not only a huge betting favorite at home in the loss in the opener, but lost to a Georgia State team that only won two games last season with one of the wins against an FCS opponent. Volunteers safety Nigel Warrior said it best after the game saying, “I’ve got one word – flabbergasted.”

Tennessee’s Jarrett Guarantano passed for 311 yards with two TD and one INT and Jauan Jennings and Dominick Wood-Anderson combined for 187 receiving yards. The pass game was not bad for UT, but the run game struggled behind an offensive line that was in disarray all game.

Ty Chandler led the Vols with 48 rushing yards, but 31 came on one carry and he also lost a fumble. Eric Gray rushed for 29 yards on seven carries and overall the team only rushed for 92 yards.

BYU is 4-0 ATS in their last four games after a loss and they had covered in five straight games before failing to do so in the loss to Utah.

Tennessee will be facing a 0-1 BYU team and they are 0-5 ATS in their last five games against a team with a losing record.

Have to go with BYU in this one, as turnovers killed them in their loss to Utah and they will not let that happen again. Both teams will play better in Week 2 and while Tennessee may get the win in what I think will be a close game BYU will, at least, cover the spread.