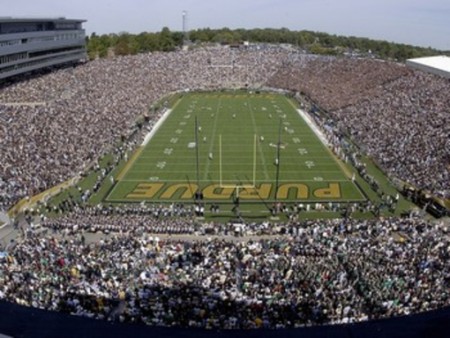 Both Purdue and Vanderbilt lost their season openers and in Week 2 at home the Boilermakers are 7.5 point home favorites against the Commodores, down from an opener of -9.5 at 5 dimes sportsbook. The total is 55.5.

No shock that Vandy lost their opener falling to 3rd ranked Georgia 30-6. Obviously, they did not get much offense in the game and look to change that this Saturday facing a Purdue team that gave up 34 points in their first game.

Purdue suffered a heartbreaking loss in their opener, 34-31 to Nevada where they saw a 56-yard game-winning field goal go through the uprights as time expired.

This is the first ever meeting between these two Power 5 conference teams.

Pass Defense will be Key

In their opening blowout loss to Georgia the Commodores were torn apart on the ground giving up 323 rushing yards, but only gave up 156 passing yards. Their pass defense will be key in this game facing a Purdue team that had 423 passing yards in their season opener.

In the Georgia game Vandy was out gained 479 yards to 225 yards and at least they had balance in the game with 109 passing yards and 116 rushing yards.

Riley Neal only passed for 85 yards averaging a paltry 3.5 yards per reception. The Bulldogs dominated the game on defense, but RB Ke’Shawn Vaughn, who is the leading returning rusher in the SEC, did have 79 rushing yards averaging nearly five yards per carry.

The Commodores were without two starting offensive linemen in the Georgia game due to injuries and it showed. The O-line has to give Neal time and open up holes for Vaughn, who should get a heavy workload in this game.

Still, he has a tall task against a Purdue run defense that allowed 109 rushing yards on a 4.4 yard per carry average in the Nevada loss.

Hold onto the Rock

Purdue only lost by three points to Nevada in the opener even though they had five turnovers and did not force any.

Elijah Sindelar passed for 423 yards with 4 TD and was picked off twice. Rondale Moore had a big game with 124 receiving yards and a TD but fumbled twice losing one of them and WR Milton Wright also lost a fumble.

Purdue only rushed for 96 yards in the loss and Zander Horvath led the team with 66 rushing yards only averaging 3.5 yards per carry and also lost a fumble.

Vandy faced a great Georgia defense and run game in their bad loss in Week 1. That game was a SEC loss and in this game face Purdue of the Big 10 and the Commodores have covered the spread in five of their last seven non-conference games.

Purdue has covered in seven of their last 10 non-conference games but have failed to cover in four of their last five games, overall.

Look for the Commodores to get a good game from Vaughn and their defense will be decent. Vandy will play them very tough and the Commodores may not get the win, but they will cover the spread.